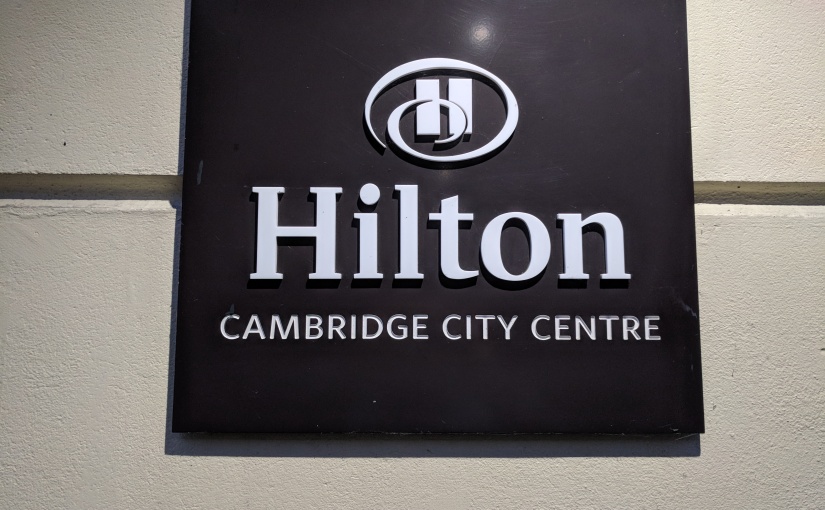 Rented a car to get from LHR to Cambridge, and it was a pretty pleasant afternoon drive. The Hilton Cambridge was easy to find. I pulled up into a small valet area. A Hilton attendant came out who is the concierge/valet/bellhop all in one. No help from him on the bags and took the elevator to the second floor for check-in. There was also escalators that were out of service about 75% of the time. The check-in in area is a atrium style area with a bar and restaurant that are open off of it. 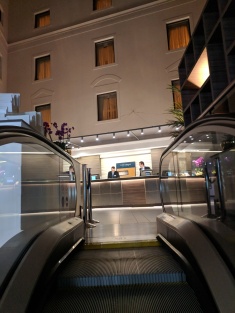 I asked if they had any Diamond upgrades and the clerk said that I have been upgraded to an executive room. I informed him that’s not an upgrade as I booked an executive room. (that was the only room type available.) He just kind of looked at me and didnt say anything. No explanation of benefits and he just handed my a key to my third floor room. I took the elevator up to my room walked in to find a not so impressive room with no outside window and interior atrium window only. I immediately went down to the front desk to ask for a new room.  He switched my room to a second floor exterior room. This room was about the same level of un-impressiveness with a disappointing view of the outside.

I don’t know what makes this an executive room. It is not large, there was no view, and there was nothing special in the room. It only had access to the lounge, which I receive as a diamond member anyways. The bed was large and fairly comfortable and there was a pretty standard desk in the corner. The closet was small but sufficient. It had an ironing board but no iron and I had to call for one the next morning when getting ready. 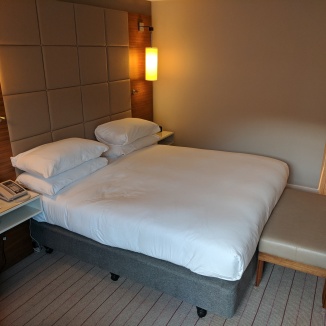 The bathroom was small but sufficient with the normal Hilton toiletries. They provided 2 bottles of water each day, and then only had a hot water pot for instant coffee or tea. 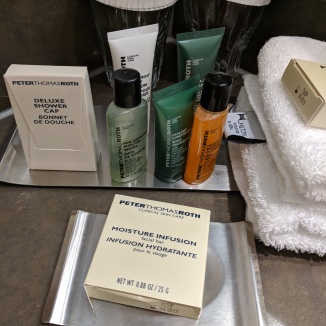 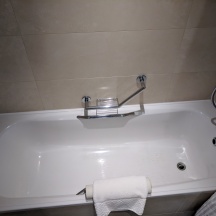 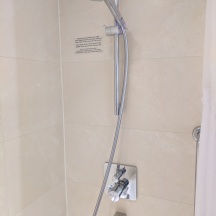 The location is great as its right in the middle of the city, walking distance to restaurants, pubs, shopping, and too many colleges to count. With an outside view, you could hear people walking down the street at all times of the day and night. I have a noisemaker app on my phone that definitely helped out.

The executive lounge was nicely setup and probably the nicest part of the hotel. very small breakfast selection in the morning though and it was the exact same each morning. However diamond members could get the full buffet in the restaurant. This consisted of a pretty basic European buffet, plus the ability to order anything off the menu. Which I ordered eggs benedict. The lounge was never crowded though. This was very nice to meet some colleagues and have the ability to work from an empty lounge for a few hours. They lounge also provided a small selection of snacks throughout the day and water and soft drinks available all day.  The happy hour from 6-8 is always the best part. not a large selection of drinks, but red and white wines, a few beer including a local IPA, a few liquors and some additional snacks. It was nothing amazing, but the setting was very relaxing. 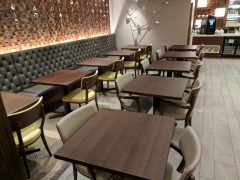 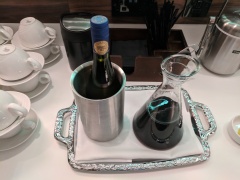 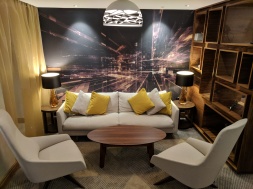 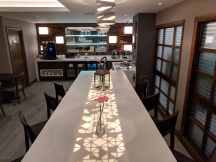 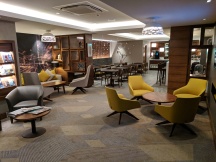 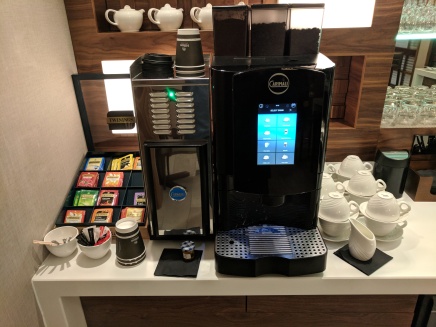 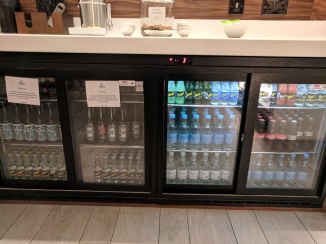 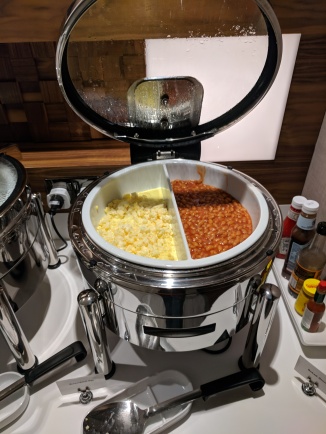 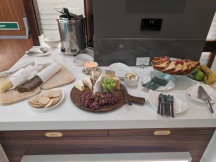 There was a nice gym located on the first floor. It was a paid membership facility with the hotel having access. I was imagining it being a full gym. However it was large for a hotel gym, but small for a regular gym. 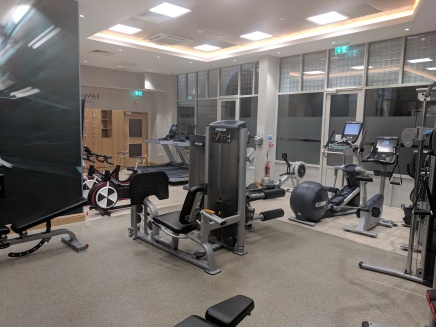 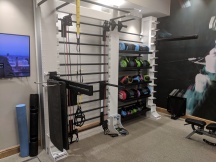 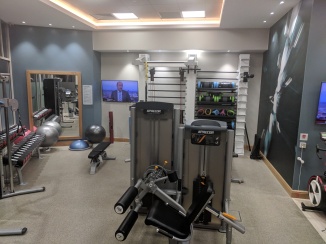 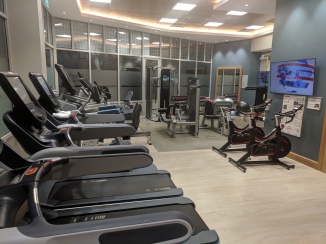 The first night there I got hungry around 11 and went for a walk only to find no restaurants open, and the restaurant in the lounge just opened. They had a selective room service menu after 11 so I ordered some olives with bread and a ham sandwich with small salad. The bread was delicious. However my ham sandwich had been replaced by peppers instead. I didn’t feel like dealing with it that night as it was now after midnight, and I just forgot about it the next day. 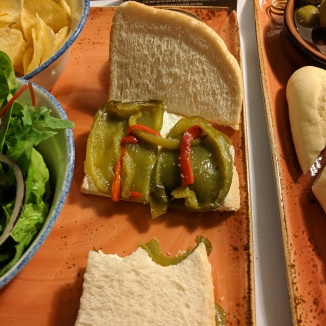 There doesn’t seem to be a lot of lodging options in the area which makes the rates from this hotel anywhere from about $300-$500 USD a night. It is not exactly a good deal and it is no luxurious. My business was less than 3 miles away and the drive took about 15 minutes to get there and 30 minutes to get back. So if you sat outside of the city a few miles, I can only imagine what the commute would be.

At the Hilton Cambridge, you are basically paying for the location. It is a perfectly acceptable hotel, but it is no frills. Next time I may research a few other local inns to see what else is out there 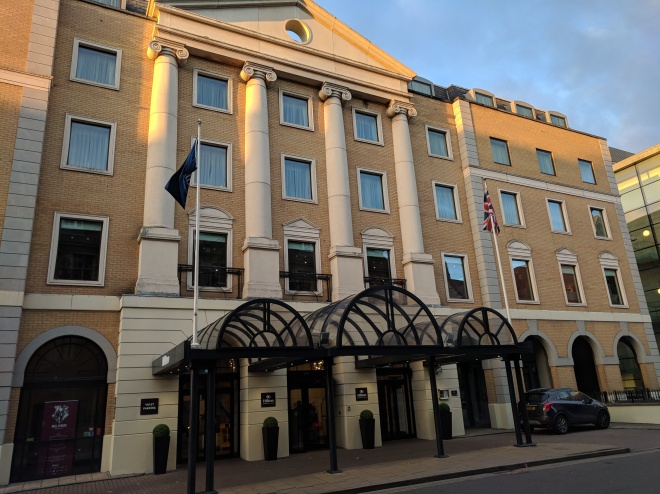